This site uses cookies. By continuing to use this site you consent to our use of cookies. Close
Back

Julian describes his experiences of moving from Romania to the UK and learning English as well as the impact of language learning at an early age.

“I will tell you how I moved from Romania into another country without knowing much about it. The new country, United Kingdom, adopted me as I was one of theirs and I felt like this is my new home from the moment I landed in Luton Airport.

The journey to adapt wasn’t easy. I spoke some English as I start to learn it in school, the second foreign language, after French. I wasn’t a great student at learning either. I thought that I will never need it. At that time (1987) I was thinking of learning Russian and my grandma thought me the Russian letters and a few words. Those letters helped me more than a few times in my life. When I was in Greece and in Bulgaria I could read the names of the streets, menu at the restaurant and a few other things.

Coming back to French and English, I learnt them because I had to. I do remember being in High School (Theoretical Maths- Physics) and the teacher responsible for our classroom was a … French Teacher. And she made it clear from the beginning: “You have to learn French, because I say so. If you don’t like it, move to another school!”

And we did, for 2 years and she moved to another school. After this one, our French lessons became fun and I didn’t learn much.

English was a steady learning process, not too intense though and the English teacher was nice. I just wasn’t too interested.

But I had some help: my colleague next to me and the one in front of her were good with languages – and they end up in Canada and US. And I was cheating some times and asking for help most of the times. And they helped me.

And that was all my English studies in school. Advice: Learn while in school !!!

Years after I wish I would’ve been a better student with languages. But I loved Maths, Physics and Chemistry.

Anyway, years passed and I found myself involved in import – export activities in a shipyard, talking English with foreign suppliers and that helped a lot.

And then moved and worked for an multinational based in UK so, I had to talk English with some managers or suppliers.

And then, moved again, in UK this time, where I had to speak … English (interesting right?). Below there is a map with the percentage of English speaking countries around the globe. You can see that even in Russia there are 0-20% English speakers. 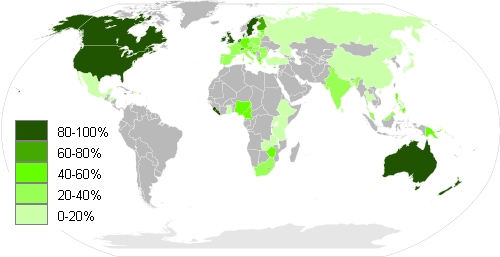 Advice: If you ever think that you might never use a skill but there is someone teaching you about it, then learn !!! You never know where your life takes you.

Being in UK, I used to live with Romanians. That didn’t help much so, I moved. And I moved into another house – full of Romanians. That didn’t help either so, I moved again. This time into a house with an English landlady. That was one of the best choices. First thing I told her was that if I’ll make a mistake talking English, she must correct me. And she still does that when we meet from time to time.

So, don’t be afraid of being wrong. Ask to be corrected and you’ll learn and you’ll get better!

Talking about mistakes, we can have a chat about spelling sheep – ship or sheet – sh.t or beach – b.tch; I still make them and my girlfriend is always laughing. I don’t mind.

The more you talk the better you get. And I am talking a lot. Somebody said a few weeks ago that I would be good to talk for a radio as I can’t stop talking.

Now, I am a hairdresser and talking to my customers about everything. But talking English with English people helps me understand their needs and deliver the right results. Sometimes I even talk for somebody else, trying to help them. I don’t need rewards, I just want to help. If I will do it maybe they will do it for someone else and the chain will grow.

I also know there are a few websites and applications that are helping people learn a different language talking to real people. I didn’t use them yet but it is worth a try."

Follow Us
©  2021 MultiLingualVacancies.com Ltd.
Powered by Talenetic Job Board Software